With Japan’s international isolation increasing, the government strongly promoted the nationalization of drugs as a national policy. As a result, in 1936 the volume of Japanese drug production exceeded drug imports, and the pharmaceutical industry entered its peak period. However, domestic production after this time was biased toward military demand, and it became nearly impossible to produce drugs around the end of the war.On the other hand, drugs that were needed in everyday life had a position in this tightly controlled economy, and were designated for rationing. Production and distribution were controlled by the Japan Pharmaceutical Product Control Corporation, sales prices were set at an official price, and companies could not engage in their own sales activities. However, pharmaceutical wholesalers(Oroshi) pushed through the fires of war even in the face of death to ensure the availability of rationed products and to preserve inventories.

Era of Chaos and Reconstruction

The pharmaceutical industry was dealt a death blow by World War II. After the war, however, the United States gave permission for penicillin to be produced and sold in Japan. This became an opportunity for many companies to enter the pharmaceutical industry, setting drug production on a path toward steady recovery.In terms of distribution, however, rationing was continued due to a shortage of supplies, and there was ongoing chaos in the form of extremely high official prices and high-priced trading of black market goods. Rationing finally ended when supply stability was achieved, and official prices were abolished, but overproduction then resulted in a severe price collapse. The mass production of penicillin in particular led to cutthroat price competitiveness. In addition, there were many companies that expanded sales and business operations based on boom triggered by the Korean War, only to end up going bankrupt.In the midst of this chaos, the Federation of Japan Pharmaceutical Wholesalers Association (JPWA) was established in 1954 to independently solve distribution challenges through such efforts as the optimization of pharmaceutical prices and the rationalization of the wholesale business.

1933
Secession from the League of Nations

1947
Abolition of the Pharmaceutical and Medical Supplies Production Rationing Regulations

1954
Establishment of the Federation of Japan Pharmaceutical Wholesalers Association (JPWA)

Traces the history of drug distribution, which has supported the development of medical society, and throws a light on the role of the wholesalers

For the Next Generation. For the Patients. 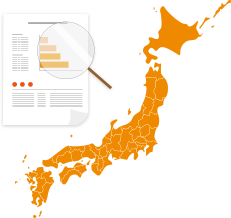 “EnTalk” is an annual series of webinars where prominent speakers from various fields provide timely information. The customers who have purchased certain number of “En” data are eligible to join.

Encise Database Series, the aggregated daily data with the cooperation of wholesalers nationwide, offer data by region, by drug, and by packaging unit. The data coverage rate is over 99%.

MC is data of out-of-hospital prescription’s flow which was independently accumulated and highly maintained by using our own network with the cooperation of 16,000 MSs nationwide.